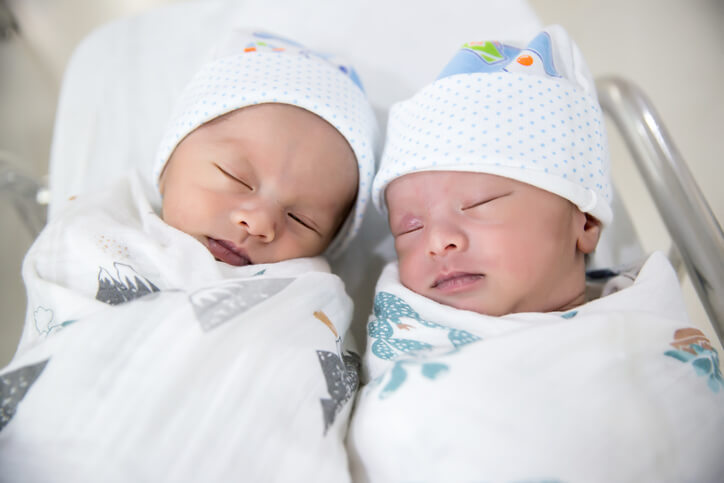 In many cases, the people who pursue surrogacy had dreams of a large family — but found it was something they couldn’t achieve on their own or through infertility treatments. Looking into surrogacy, they may still have hopes of having more than one child as quickly as possible. Therefore, they may ask, “Is it possible to get twins from a surrogate mother?”

The answer is yes.  Whether it’s because of a natural split in the uterus, resulting in identical twins, or transferring two separate embryos that implant, having twins during the surrogacy process is definitely a possibility — but it does come with certain considerations.

Here at American Surrogacy, we are experienced with gestational pregnancies of twins, and our team is happy to help you start your surrogacy process today. Don’t hesitate to reach out to our specialists at 1-800-875-2229(BABY) but, in the meantime, keep reading to learn more about how it is possible to get twins from a surrogate mother.

It’s no secret that the surrogacy process is expensive. Intended parents who pursue this family-building path may have spent months or years saving up to afford the costs of a gestational surrogate carrying their biological child. So, it’s fairly common for them to ask, “Is it possible to get twins from a surrogate mother?” to get more “bang for their buck,” so to say. Rather than simply hoping for one healthy, biological child, they wonder if they can have a gestational carrier carry twins. This way, they can have the bigger family they dreamed about without having to go through the surrogacy process more than once.

In other situations, having twins via surrogacy may provide a genetic connection for both parents that would be otherwise impossible. Take, for example, a gay male couple. In a singleton surrogacy, only one of the fathers could be genetically related to a child. But, when a surrogate carries two children, each parent could have a genetically related child. For some parents, genetic connection isn’t always important — but a twin gestational pregnancy provides that option for those who want this advantage.

How a Multiples Gestational Pregnancy Occurs

There are two main ways in which it is possible to get twins from a surrogate mother.

The most common way is through multiple embryo transfer. In the majority of surrogacy journeys, reproductive endocrinologists evaluate the quality of intended parents’ embryos to ensure only the healthiest embryos with the best chance of implantation are transferred to a woman’s uterus. If more than one embryo has a high enough quality, two embryos may be transferred. The odds that both will implant are usually low but, when they do, a twin gestational pregnancy occurs.

The decision to transfer multiple embryos in one procedure will always be determined before the medical process of surrogacy begins. Because there are important things to consider about a multiples pregnancy (more on that below), intended parents and their gestational carrier will discuss this in depth and finalize their decision in their surrogacy legal contract.

Another less-common way that a multiples gestational pregnancy occurs is when a single embryo is implanted in a carrier’s uterus, only for that embryo to naturally split and create identical twins. In the general population, identical twin pregnancies only occur about 0.45 percent of the time, but there is evidence that using in vitro fertilization can increase that possibility to an overall 0.95 percent. Regardless, having identical twins via surrogacy is still rare — but not impossible.

The Cons of a Multiples Pregnancy

Before asking, “Is it possible to get twins from a surrogate mother?” ask yourself this: “Do I really understand the risks of a multiples gestational pregnancy?”

If you are an intended parent, it may be a bit easier to look to the advantages of having multiple children at once — but you need to think seriously about the risks you ask a gestational carrier to take on if you are interested in this path. There is a reason why many reproductive endocrinologists today recommend transferring a single embryo to a woman’s uterus during IVF, whether or not it’s a gestational pregnancy. When a woman carries more than one child, her risks of complications and potential dangers during her pregnancy greatly increase. Are you comfortable asking someone else to accept those risks on your behalf?

If your gestational carrier is pregnant with twins, there is a higher likelihood of:

So, yes, transferring multiple embryos to your gestational carrier’s womb can seem like the perfect way to complete your family in one IVF procedure, but this decision involves much more than that. You will need to speak at length with your fertility professional to determine what options are available in your situation and what the safest path is for your gestational carrier.

For more information about having twins via surrogacy, please reach out to our surrogacy specialists at 1-800-875-2229(BABY) and your personal reproductive endocrinologist.